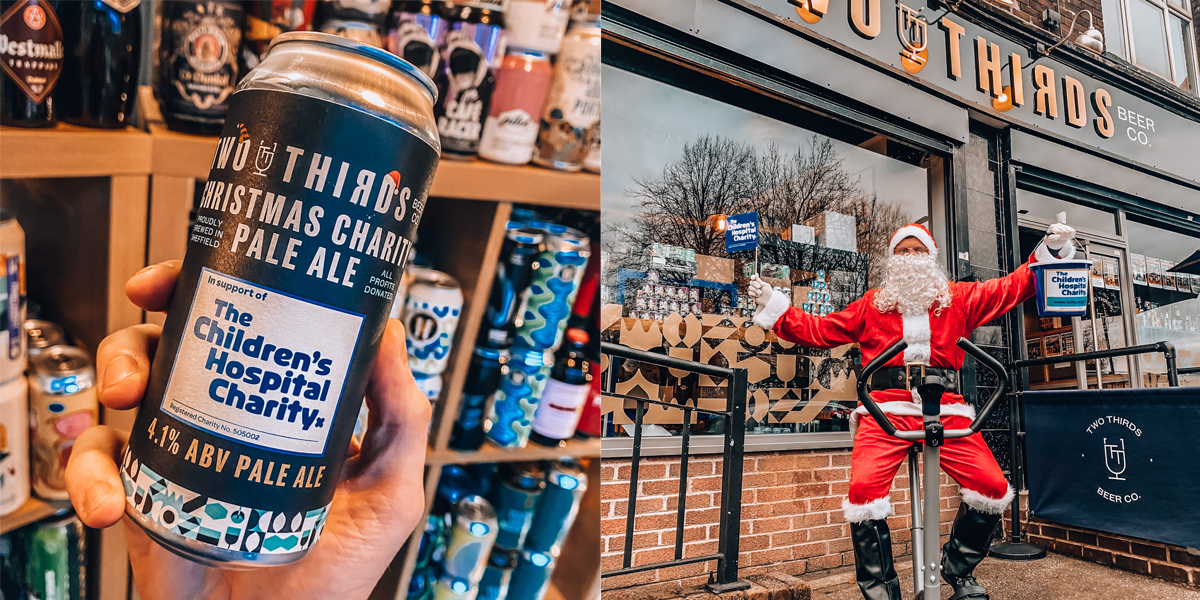 Abbeydale Road bar Two Thirds Beer Co. have launched their first-ever beer in collaboration with Abbeydale Brewery, and they plan to donate all profits from every can sold to Sheffield’s Children’s Hospital, in a bid to raise £5,000 for the charity.

One thousand limited-edition Two Thirds Christmas Charity Pale cans are available and can be purchased online, for collection and delivery, via their website http://twothirdsbeer.co/charity-beer, or by popping down to their bar-turned-Christmas-shop, open 12 – 7pm, seven-days-a-week.

“Despite the fact that our boozer is currently closed again, it’s been manic since we launched the charity can a couple of days ago, with hundreds of cans sold already.” Says Two Thirds co-founder Ben Stubbs.

“Whilst we appreciate it’s been tough for ourselves in the hospitality industry, due to covid we’ve actually been closed longer than we’ve been open, it’s nothing compared to the £3 million funding deficit the Children’s Hospital have faced this year and so we’ll also be donating our £1,000 government lockdown grant for wet-led pubs straight to the hospital charity too.

In an attempt to reach their £5,000 target, they’re also auctioning off can #001 (the first can off the production line & the first ever can of beer brewed to support the Children’s Hospital!) to the highest bidder. The auction ends this Friday at 9pm and you can place your bid at http://twothirdsbeer.co/charity-auction

Not content with all that, this weekend will also see the lads launch their Two Thirds Christmas Charity raffle – with everybody who purchases a can of charity beer, in store or online, receiving a raffle ticket with a chance to win a £500 bar tab, plus plenty of other gifts generously donated by many local, independent businesses.

Ben adds: “On Saturday, all three of us will also be donning full Santa outfits, getting on the exercise bike outside the bar from 10am, and donating £1 for every kilometre cycled too! Satans Glaze will also be outside slinging out the donuts all day long too.”

If raising money for the Sheffield Children’s Hospital Charity isn’t a good enough reason to drink beer, we don’t know what is! More info can be found on Two Thirds socials.