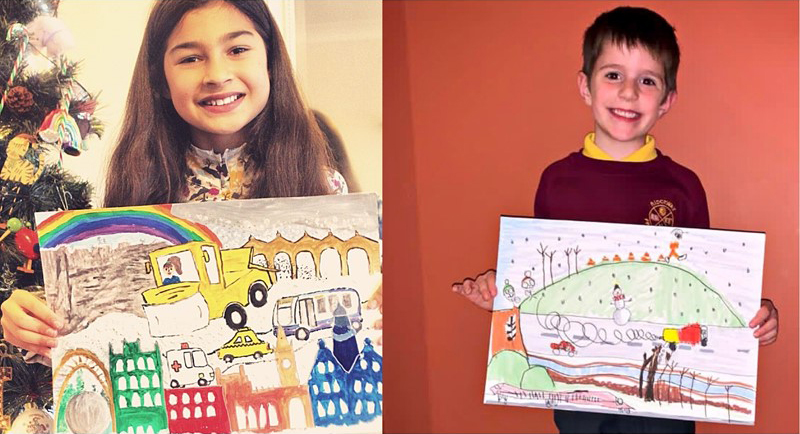 Posted at 16:54h in Good News by Ashley Birch 0 Comments

Two new designs will be seen on Sheffield’s gritting lorries this winter, after Streets Ahead hosted an art competition for primary school children across the city.

The competition launched at the beginning of November encouraged children to showcase their artistic talents by creating designs for two of the city’s gritting lorries, which form part of the Streets Ahead fleet helping to keep Sheffield safe during winter.

‘Sammy Snow’ and ‘Gertie Gritter’ were both in need of a new coat and Streets Ahead asked for some eye-catching entries from budding young local artists to help spruce them up.

The competition was split into two age groups; 4-7 years and 8-11 years, and had a fantastic response with over 100 entries received from schools across the city.

Cabinet member for Environment, Street Scene and Climate Change at Sheffield City Council, Councillor Mark Jones said: “The gritter design competition was a great incentive to encourage school kids to use their artistic talents and be in with the chance of having their design viewed by hundreds, if not thousands, of people across Sheffield this winter.

“There were some fantastic entries and it was an honour to be part of the judging panel and see just how creative our youngsters can be.

“I’d like to say a big well done and thank you to all those who submitted entries and I personally can’t wait to see the designs emblazoned on the side of the lorries.”

This year, due to the social distancing restrictions, the winners are not able to go to the depot to see their designs unveiled, but in an extraordinary move, both Sammy Snow & Gertie Gritter will visit them in the new year to show off their new coats. Each winner will also receive an art gift set worth £60.