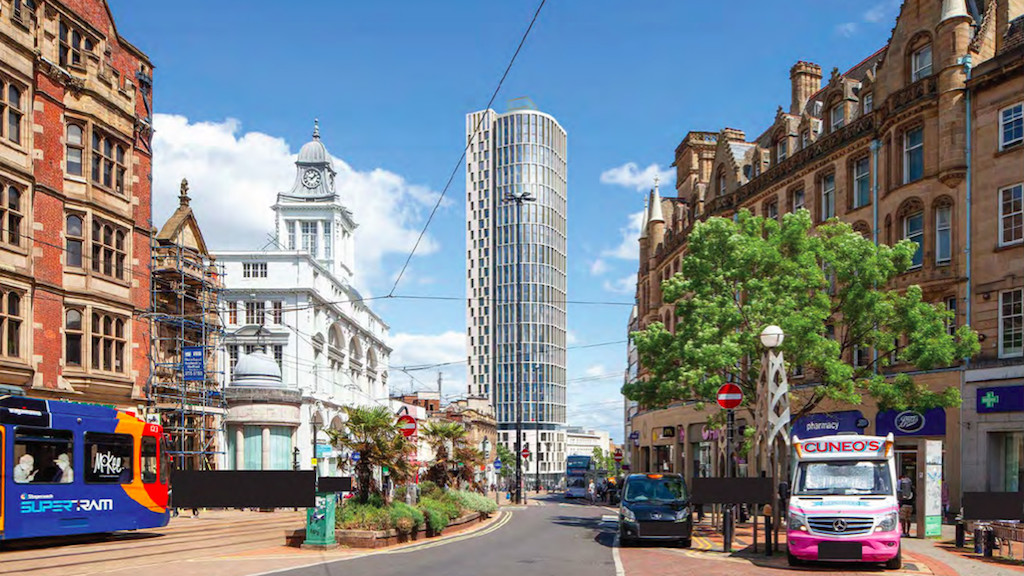 Plans for a 39-storey tower in Sheffield city-centre that could become one of the tallest buildings in Yorkshire are recommended for approval when they go before the council’s Planning and Highways Committee on 8 December.

SFGE Properties, supported by Crowley Associates and Hodder+Partners, submitted an application to Sheffield City Council earlier this year for a site the junction of High Street, Angel Street, and Arundel Gate, previously occupied by Primark.

The application seeks planning approval for the demolition of the existing building and construction of a new 39-storey tower.

The proposed Kings Tower development would comprise a total of 206 apartments, with 110 one-bed, 92 two-bed apartments and four studio units. A commercial unit would be created on the ground floor, with cycle storage, concierge facilities and a post room also provided for residents.

An adjacent property, which also previously formed part of the Primark store, now operates as an Easyhotel. A resident’s lounge for the new development would be located in this building.

Public realm improvements would be made to the surrounding area as part of the works, with King Street market retained. A separate application has been submitted for the temporary relocation of the market during construction.

The application will go before the council’s Planning and Highways Committee on 8 December and is recommended for approval, subject to conditions, in an officer’s report prepared for the meeting.

The report said: “The proposal will secure a well-designed, visually distinctive residential tower on a sustainably located brownfield site, which will create a local landmark and aid the legibility of this part of the city centre as well as providing substantial regeneration benefits.