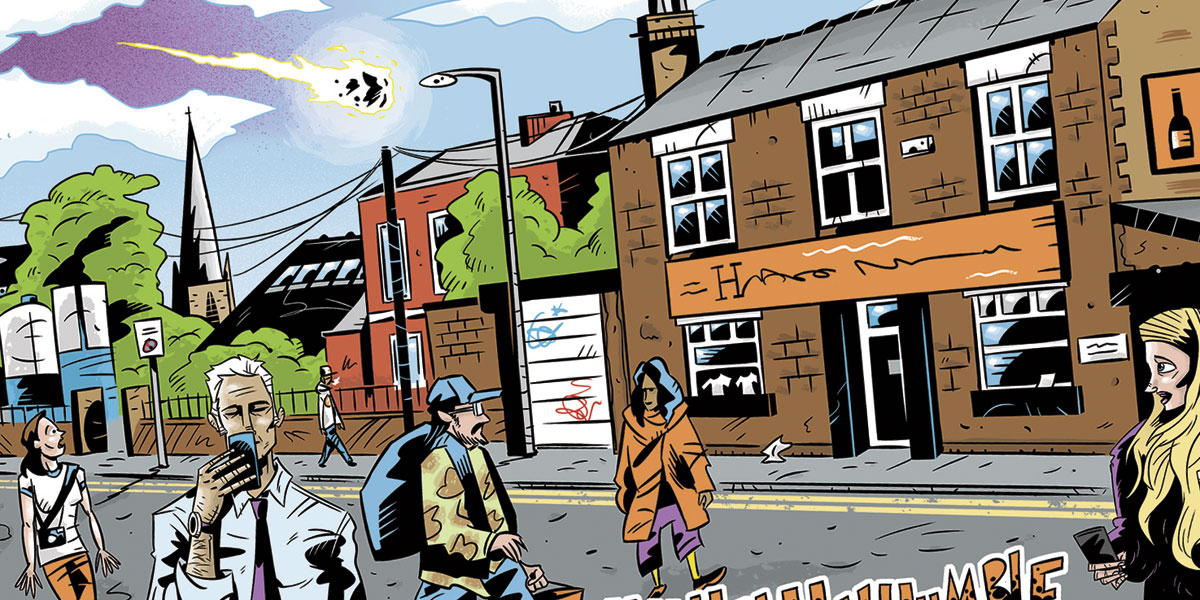 Posted at 12:57h in Good News by Ashley Birch 0 Comments

Sheffield-born illustrator Jim Connolly is attempting to realise a lifelong ambition by creating a comic book based on his hometown, and he needs your help.

Jim has completed the first act of his comic book, but, as he is likely the backing of a media empire, he needs a little help to finish it off and has launched a crowd-funding campaign to raise the remaining funds.

The comic, titled ‘Made of Steel’, has been in the works ever since he made a shocking discovery in the 80s.

He said: “I was sat on a bus with my mum circa ’82 and was shocked to discover that Spiderman, the Hulk, Batman etc were not based in Sheffield. I was deeply gutted and think in retrospect that much of my adult career has been shaped by trying to put that moment right.”

Since that fateful day, Jim has gone on to work as an illustrator, and sometimes cartoonist, and he says he now wants to create his own comic book, inspired by the scores of Marvel and DC comic books he read as a child.

Recognisable locations include a factory that resembles the original Henderson’s Relish location on Leavy Greave Road, a familiar Kelham Island pub renamed ‘The Rotund Feline’ and a representation of Tinsley Towers.

Meanwhile, characters depicted are based on Sheffield icons such as Vulcan (representing the statue atop Sheffield’s Town Hall) and the local football teams reimagined as kaiju monsters battling in town.

The main protagonist is a hero called Steel Bolt, described as “punky/indie teenage college student from ‘Steel City’, an alt-universe version of Sheffield”.

“She’s too cool to stick on some stupid leotard/bikini and instead goes for a roller derby meets knight look with signature Britpop tat:, says Jim, “She’s young but has a sharp wit and is totally fearless. She’s new to the hero caper but lives to look out for her city.”

Launched on 1 October, Jim has given himself 31 days to raise enough to cover his overheads as well as self-publish and distribute the comic books.

There are different tiers, from a low-cost digital version of the book right up to being able to actually appear in it to score the winning goal in the Steel City Derby that is going on in the background of the main battle. Jim will also have tiers to pledge for the original artwork pages, art prints of the alt-universe teams logos and other cool rewards.

“Please help me put things right for that kid on the bus in ’82!” he said.

To find out more, visit Jim’s website or Kickstarter page.